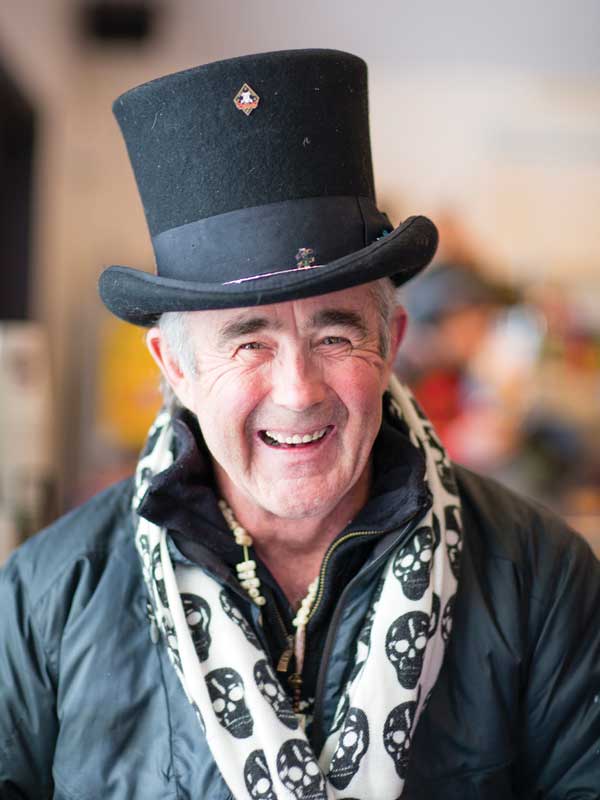 Hatfields v. McCoys. Roadrunner v. Coyote. Jackson Hole Air Force v. Jackson Hole Ski Patrol. To provide an introduction to the Jackson Hole Air Force in the above manner is a fun, but not entirely accurate description of what Jackson’s famed underground ski group is about. The Jackson Hole Air Force was not founded as an anti-authoritarian group of skiers. The Jackson Hole Air Force wasn’t even founded on purpose — it just happened. The term “air force” (without capitals) was originally ski-area jargon used to describe anyone who was skiing good lines that involved departure from the earth’s surface for varying amounts of time. This term was invariably used to describe Benny Wilson who, as the son of the founder of the Hostel X, literally grew up at the Jackson Hole ski area. During the second week of February in 1986, 14 feet of snow fell in the Tetons, closing the lifts at Jackson Hole for several days. In between beers at the Moose and Howard’s Bear Claw Café during this forced hiatus from skiing, Benny and co-conspirator Howie “Hollywood” Henderson brainstormed the idea of having Henderson’s film company include footage of the “local boys” at the beginning of the film shorts he was selling to tourists who had commissioned him to immortalize their families’ turns on film (the rationale being that if the patrons were paying good money, they might as well have some good turns to watch when they got home). As turning a camera on and pointing it at someone in their twenties has been proven to lower their fear threshold and intelligence in unison, this was much of the catalyst that was necessary for Benny and his brethren to formalize the name as their own. 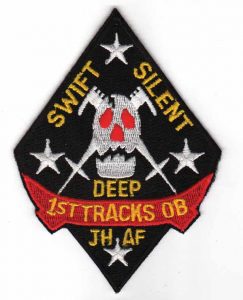 The common thread of the Air Force was initially just recognition of a group of dedicated skiers who were good at what they did. However, as the ski area began to experience a growth in visitation, the members of the Air Force began heading outside ski-area boundaries more regularly to find their fresh powder and soft landings. This trend was disconcerting to the ski patrol, who feared that less-experienced skiers would attempt to follow Air Force tracks into dangerous and avalanche-prone terrain (not to mention being a mandate from the U.S. Forest Service to curtail out-of-bounds skiing). In an attempt to stem the tide of rope-ducking, the ski patrol began to crack down on out-of-bounds skiing by using their leverage to terminate or suspend skiing privileges to dissuade would-be “powder poachers.” Responding to this by borrowing the “Swift, Silent, Deadly” motto of the U.S. Marine Corps Reconnaissance Battalions, Jackson Hole Air Force (JHAF) patches began appearing with a skull and crossed ski pole insignia and a JHAF motto taking credit for their mastery of the out-of-bounds reaches: “Swift, Silent, Deep – 1st Tracks OB.”

Membership in the group grew over time, but secrecy rather than attention was the protocol of the Air Force. The nod for inclusion in the underground group was typically accomplished with a patch being subtlety delivered to the new inductee in settings ranging from the barroom to the tram line. While not really looking for trouble or attention, the red eyes of a JHAF patch staring out defiantly from underneath ski coat collars (okay, maybe looking for a little bit of trouble) raised the ire of patrollers — some more than others.

Patrollers began clipping corners off of the season passes of violators of ski-area boundary policy. No more corners, no more pass. Lore abounds regarding the cat-and-mouse game between patrollers and JHAF members, with one of the more colorful anecdotes being that of Benny hauling a homemade coffin full of closed-area boundary signs into the Stagecoach Bar during the annual ski patrol fundraiser “Sweethogs & Swinehearts Ball.” However, the most widely publicized event of the “closed-boundary era” between the Air Force and patrol was the banishment of two-time World Extreme Skiing Champion and Steep and Deep Camp founder Doug Coombs from the ski area. After several warnings from patrollers to stop his poaching ways, Coombs was reported to have been caught “on the wrong side of the line” by Peter MacKay (a patroller nicknamed “Dr. No” for his prioritization of pursuing poachers). 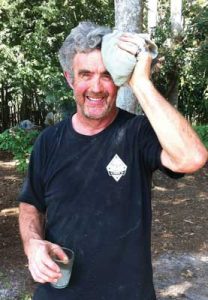 Coombs maintained his innocence and even offered to re-ski his line with his accuser. However, the die was cast, and Coombs was forced to leave the mountain — ultimately reopening his steep camps in La Grave, France. While the loss of Coombs was considered a blow to both his Air Force brethren and the general Jackson Hole ski community, Coombs’ expulsion is considered to have been instrumental in the creation of Jackson Hole Mountain Resort’s open-boundary policy (which now occurs only through distinct backcountry gates), which was instituted in 1999.

It could be argued that some of the mystique of the JHAF dissipated when activities they were long persecuted for became legal. However, an observant eye in the tram line tuned to well-worn ski clothes and hard-used equipment may reveal a JHAF patch or pin poking from underneath a cuff or collar. Best to get a good look at it before the tram doors open and the wearer disappears, leaving only the contrails of cold smoke powder.

Oddly enough, I can’t provide an account of Benny’s temperament during the closed-boundary era. I am sure he wanted to ski with me, but I was elusive, hiding out on Casper lift in a one-piece powder blue ski host suit with a name tag. I was probably too intimidating to approach. Lack of firsthand verification aside, it is a reasonable hypothesis that the leader of Jackson Hole’s then-outlaw band might have had a little edge to him in those days. For pure mystique’s sake, you would almost hope so.

However, if that was the case then, it is not now. Benny finally was able to overcome my intimidating aura when we became friends on a mission to Cuba with St. John’s Church. With the advent of private property ownership in Cuba, a home had been transferred into the hands of a parish in the small town of Favorito. Our mission was to aid in its conversion into a church, complete with a water system to serve the local community. Benny became an instant favorite in the community during this endeavor, with many marveling at his ability to “MacGyver” (not a term widely used in Cuba) a hose connection or similar feat that was undoubtedly a function of years of training as a jack-of-all-trades at the Hostel X. 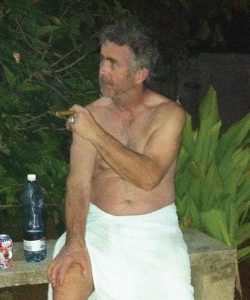 Benny contemplates his fate while eyeing the recently “fixed” shower.

And while kinder, gentler and a fan favorite, this is not to say Benny did not bring a little Air Force color to the dormitory when we were all woken up one morning by some alignment of Cuban electronics that sent a blue arc of current from the shower to an unknown ground at the other end of the room. Sitting upright and without thinking, Benny combined the word “holy” with another word, the sum of which created a phrase that likely confused his bunkmate, Fr. Ken Asel, or anyone else understanding the concept of the Immaculate Conception. That evening, we returned from a day’s work to the report that the shower had been “fixed.” A daredevil at heart, Benny volunteered for the first shower, steeling himself for the challenge with a Cuban cigar and a Bucanero beer (a worthy last meal if it was going to be).