When viewing the residential real estate market as a composite of single-family homes, attached homes (condo/townhouse), and single-family homesites, the Teton County Real Estate Market is noted to have had roughly the same number of sales (slight decrease of 2.5%) when comparing YTD data through the first three weeks of July 2017 to that of the previous year. Real estate pricing showed continued appreciation during this period when viewing sales and resales of the same or similar properties.  However, this trend was somewhat obscured when viewing composite market averages, as more activity in the local-oriented market (as opposed to the resort market) influenced overall averages down in many market segments. Limited inventory continues to be cited as contributing to both the trend of lower sales volume in the high end market and the appreciation of the existing inventory.  Growth rates for the pricing of upper end resort properties is estimated to be 3% to 5% per year range and 5% to 10% in the more moderately priced market segments. These rates are less than the appreciation rates that were commonplace immediately after the market inflection in mid-2011. However, it is logical (and healthy) that pricing growth has moderated when considering the sustainability and long-term trajectory of the market. 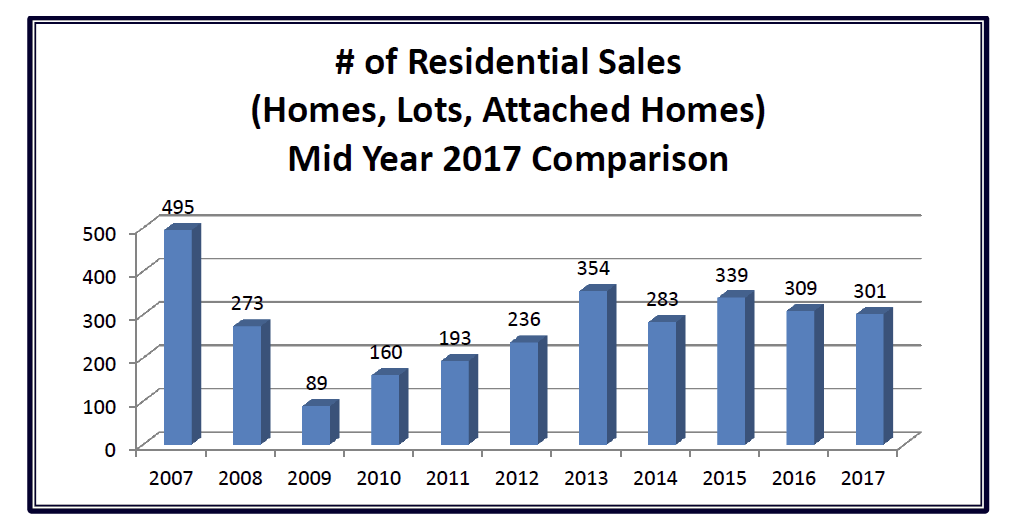 The single-family home market showed a contraction in the number of sales, with the local market remaining basically level (growth in volume 1.52%) and the Resort Market decreasing nearly 30%.  As previously noted in this report, prices have continued to experience upward pressure (as noted by the comparison of sales and resales of the same or similar properties). Despite an increasing trend in prices, the above-arrayed averaged data shows prices only having increased one-half percent. This is the result of changing composition of the sales inventory. As an example, the sale of one home over $10,000,000 in the first half of 2016 pulled the average value of the top ten sales of single-family homes nearly 14% higher than that of 2017, which did not have an eight-figure sale in its opening half. Considering the unpredictability of the luxury home market, this fluctuation is noted to be more happenstance than being indicative of a trend.

Vacant land sales were up in number for both the Local and Resort Market through the first three weeks of July 2017 when comparing to this period the preceding year.  Similar to the data for single-family homes, greater activity in the lower-priced segment of the market was responsible for pulling overall averages down, despite all segments of the market showing price growth. In particular, the availability of any building site less than $400,000 in price has become infrequent, but six such lots have sold YTD in 2017 as compared to three lots in this price category during the same period the previous year. Notably, two of the sales of less expensive lots in 2017 were in peripheral locations in Teton County and current inventory of similarly-priced lots only exists in the Hoback area (12 miles south of the Jackson town center) or the Moran area (35 miles north of the Jackson town center). Prices show continued signs of stable-to-increasing prices in the higher-end Resort Market as well. However, the non-reporting of four lots in the Shooting Star Development (homesites likely in the $2MM – $3MM range) is hypothesized to be responsible for skewing averages downward when viewing the aggregated data.

Attached home sales (condo / townhouse) were essentially level in number when comparing the YTD through the first three weeks of July 2017 to this period the preceding year. Similar to the data for single-family homes, greater activity in the lower-priced segment of the market was responsible of skewing overall averages down, despite noted appreciation when observing individual unit pricing. As an example, five sales were noted to occur in the more affordable Cottonwood Flats development in 2017 YTD, as opposed to one such unit having sold in 2016. And, while the prevalence of such sales pulled overall averages lower, these units (Cottonwood Flats) were actually transacting at price points $10,000 to $18,000 higher than the previous year. 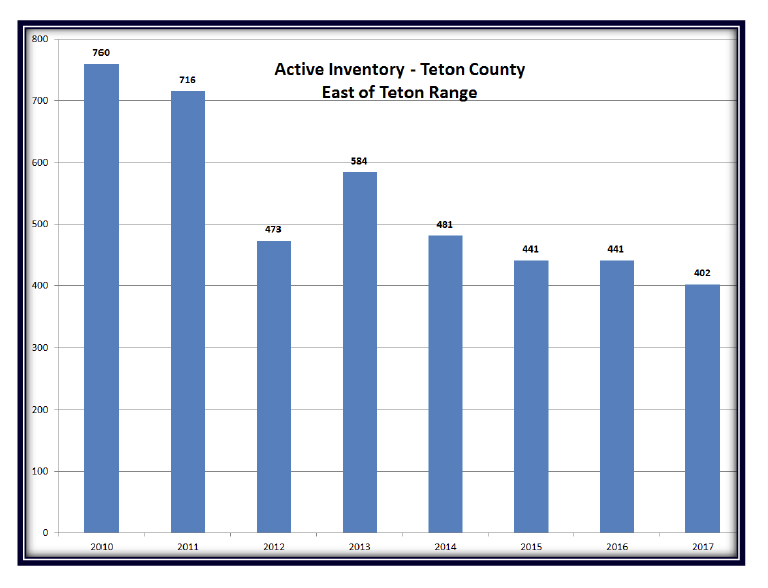 The preceding table arrays an end-of-July snapshot of inventory levels for the past 7 years. Inventory levels continue to remain low and are frequently cited by agents as a stagnating factor for volume levels. As shown by the preceding data, the inventory of homes, attached homes, and vacant land listed for sale was showing to be nearly 9% lower than this time last year, and limited inventory will likely be a factor for the foreseeable future. 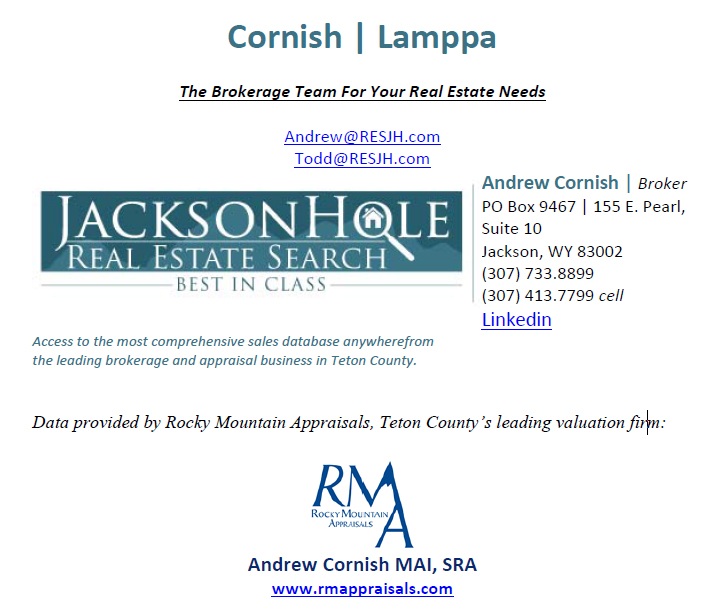