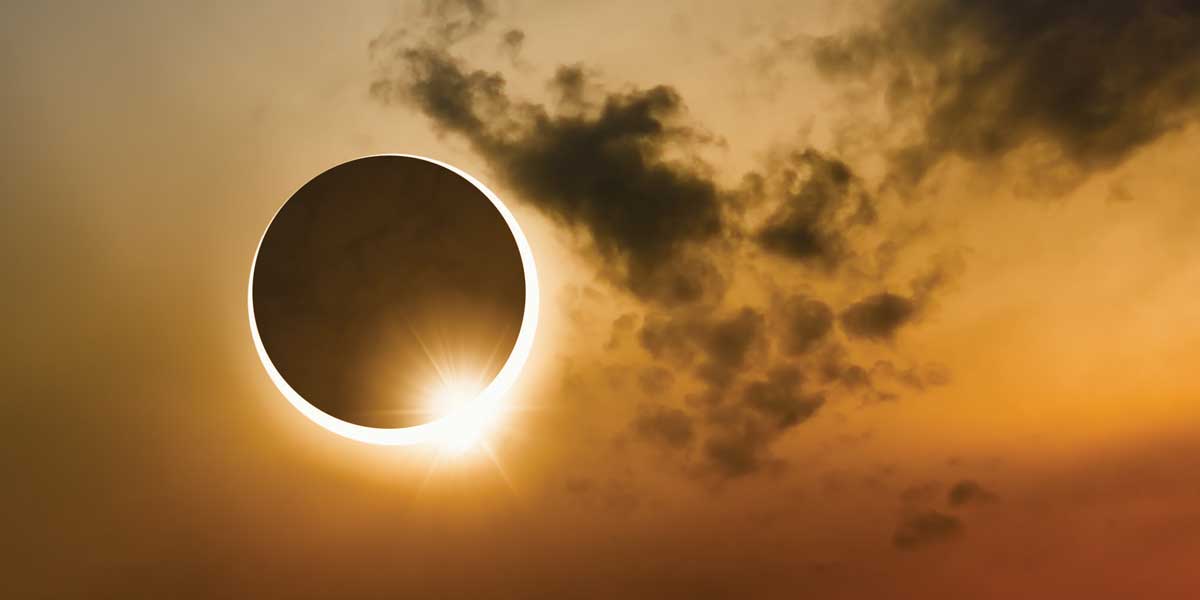 On August 21, 2017, a swath of North America will be plunged into darkness from coast to coast. It won’t be some sort of man-made electrical grid glitch, however, but the cosmic phenomenon of a total solar eclipse in the middle of the day. The relatively narrow path under which the moon will completely block out the sun runs across the United States, west to east from northern Oregon to South Carolina. Underneath this route, a complete blackout of the sun for approximately two and a half minutes will take place — and will pass directly above Jackson, Wyoming.

For those lucky enough to be living in or visiting Jackson or Grand Teton National Park, the path of the eclipse will be an incredible show in the sky for a couple of hours, as the moon moves into and then out of the direct line of the sun overhead, casting its shadow below. It will be possible to see the moon as it slowly approaches the sun and begins to cover it up over a time frame from the beginning of the partial eclipse, around 10:15 a.m. Mountain Standard Time, to the total blockage, which will be about an hour and a half later, according to the NASA information page on the eclipse. Another partial eclipse of about an hour will follow as the moon passes by the sun.

Observing the path and shadows of the moon as it approaches and passes by the sun will be spectacular. At approximately 11:39 a.m., the moon will completely block the sun above Jackson, leaving only a ring of light blazing behind the darkened orb of the moon. This ring of light is called the corona, and observers will also be able to see the sun’s flares in the corona. The two minutes of total darkness when the corona is visible is the only point during which you can look at the eclipsed sun with a naked eye. As the moon approaches the sun and begins to pass by it after the total eclipse, special solar glasses are required to avoid damaging your eyes and vision.

The fact that the moon, which in reality is about 400 times smaller than the sun, can cover up the light completely is the result of a fascinating cosmic coincidence: The moon happens to be about 400 times closer to the earth than the sun. Therefore, when viewed from the surface of the earth, the two celestial bodies appear to be roughly the same size, which is how the tiny moon manages to block the sun. Around the globe, total eclipses are not uncommon, but the last time a total solar eclipse passed over the United States was 26 years ago, in 1991.

Communities under the path of the eclipse are preparing for a huge influx of excited eclipse viewers. In Jackson Hole, an already bustling tourist destination in the summer, the eclipse offers another incredible opportunity and reason to visit the area. Eclipse hopefuls should be aware that hotel rooms in the valley have already been booked for months, and rental car companies have been allowing visitors to book cars much farther in advance than usual in preparation.

Overall, local authorities are expecting a huge influx of visitors hoping to catch the spectacle from the peaks of the Teton Range, or in the beautiful valleys to the east and west of the Tetons. According to Sam Singer of the astronomy group Wyoming Stargazing, the advantage to observing the eclipse from higher ground atop one of the many nearby peaks is that you will be able to see the moon’s shadow cone on lower elevations as the moon approaches the sun.

If you can’t get yourself on top of a peak, no need to worry. Wyoming Stargazing and the local stargazing community are preparing with huge enthusiasm. Wyoming Stargazing usually runs stargazing programs and astronomy presentations year-round in Jackson Hole. For the eclipse event, they will be sponsoring a free viewing gathering in downtown Jackson. During the eclipse, the group’s experienced astronomers will be able to answer questions, point out interesting phenomena and guide viewers through the event. The group will also have solar glasses for sale, with which viewers can safely observe the partial eclipse as the moon moves over the sun. During the week leading up to the eclipse and for a few days afterwards, they will be hosting extra stargazing programs as well as daytime astronomy events.

For local events, contact Wyoming Stargazing (wyomingstargazing.org) or the Chamber of Commerce website (jacksonholechamber.com) for eclipse-centric viewing parties and events.

For information on the eclipse across North America, visit greatamericaneclipse.com, or the NASA page for the event, eclipse2017.nasa.gov.

See the Eclipse from the Top of the TRAM!

JHMR will be operating the tram on the day of the eclipse, offering 780 rides to see the event from 4,139 feet above the valley floor. Sixty percent of the available tickets for this once-in-a-lifetime opportunity were sold in one day of presales at $100 per ticket. The remaining 40% of these tickets are being made available this spring at yet-to-be determined pricing. The Mountain Resort has provided the Cornish |Lamppa Realty Group with two of these coveted tickets that you can enter to win.