The first four months of 2016 saw a continued increase in the number of single-family home sales, while attached homes (condominiums and townhomes) and vacant homesites sales lessened in number. Real estate pricing in Teton County has continued  to generally show upward trending, but at lower rates of appreciation than had been noted in the “rebound period” of 2012-2015. Tightening inventory is the most frequently-identified reason for moderating sales volume, with a corollary of current inventory levels being that sellers feel confident to aspire for price points reflective of continued robust appreciation, with the reticence of buyers providing the indication that a leveling of prices may be the buy-side interpretation of the market  (said otherwise… a standoff).      After 3-4 years of very strong appreciation, it is intuitive that the rate of price growth will, in fact, moderate. However, continued low inventory levels and sellers that often do not have a motivation to sell within a time constraint may dictate that sales volume numbers remain low while the interaction of these opposing market forces plays out. Notably, while the aggregated data on pricing shows a decrease in the overall average price of real estate, this is simply a result of the small sample size of sales, as the comparison of the sales and resales of similar properties indicates a level-to-still increasing trend.

The single-family home market segment was the only segment to show continued growth in the number of sales.  Average sales prices in this market segment shows a level reporting for the Local Market and a slight drop for the resort market. However, as previously discussed, examination of individual sales reveals a level-to-slightly increasing value trend being currently ongoing, with the aggregated data being skewed by its small sample size.

Vacant land sales decreased in number for both the Local and Resort Market with the decrease in volume being similar in magnitude for both market segments.  The average sales price for the local market showed a substantial increase (39.49%). However this measure was atypically influenced upward by two sales in the Gill Addition this spring, an area that arguably may now be more aptly considered as part of second home market. Conversely, the average price of lot sales in the Resort Market was skewed downward by the influence of two sales of two 6,400 sf pads for cluster homes in Teton Pines.  Examination of resale data of similar lot provides the indication of a stable-to-slightly-increasing value trend for the both market segments.

The number of attached home sale was off an average of nearly 31% when considering both the Local and Resort Market. The observed sales indicate a drop in average price, but this is again due to the small sample size in early-year reporting. In particular, the first four months of 2015 saw the sale of five (5) Four Seasons Residences units, while no such units have transacted yet this year. A review of active listing data indicates that only one such unit is currently available for sale, indicating that the lack of sales may be a result of low inventory. Similarly, competition for inventory in the Local Market appears to be ongoing, as two listings in the Cottonwood Flats addition were placed under contract in less than a month of being listed when being price between 3-5% above the previous sales of such units. 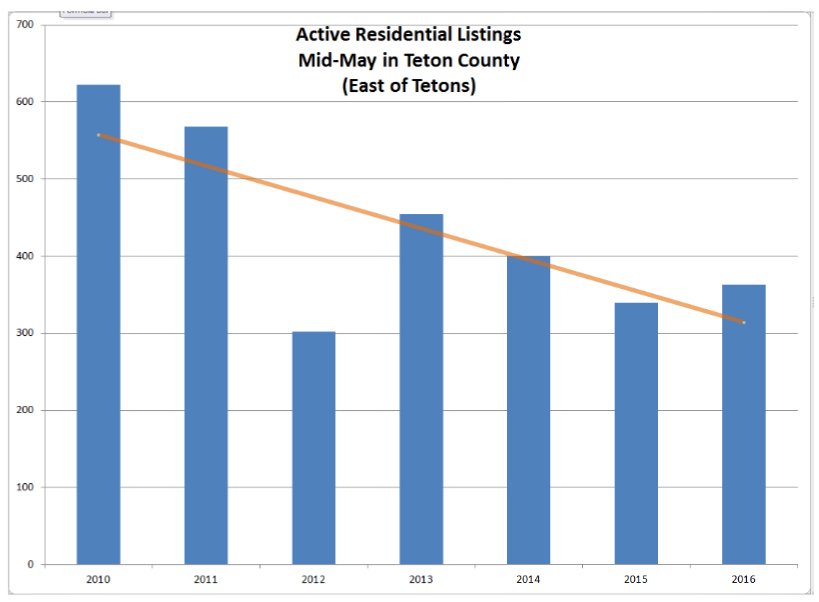 The preceding table arrays a mid-May snapshot of inventory levels for the past 7 years. Inventory levels continue to remain low and are frequently cited by agents as a stagnating factor for volume levels. As of mid-May of 2016, the inventory of homes, attached homes, and vacant land listed for sale was showing to be 6% higher than this time last year, but still near post-recession lows.