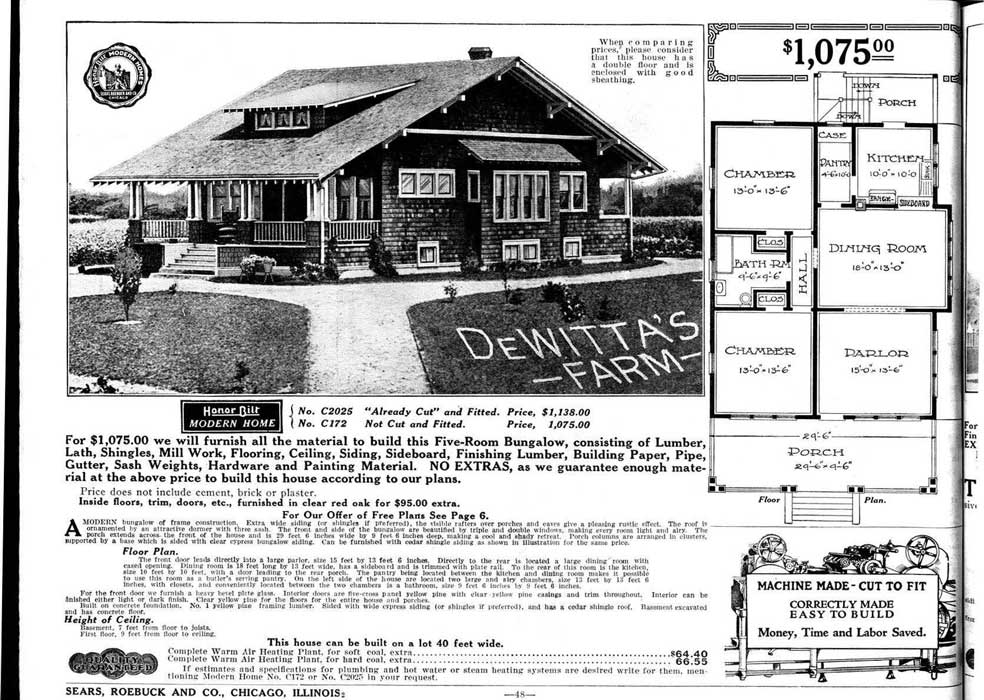 “The Hazelton” (Model Nos. C2025 and C172) Sears Catalog Home appearing in the 1916 Sears Roebuck Catalog. Modular construction is far from a new concept: Sears, Roebuck and Co. sold approximately 75,000 build-ready kits for homes in the first half of the 20th century.

An examination of modular or “off-site” construction as the new Community Learning Center building is shipped from Boise to its site location in Jackson. 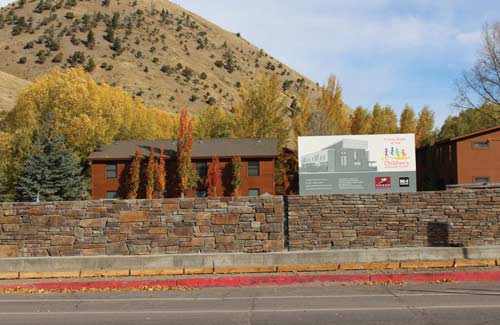 The foundation of the Community Learning Center is shown before the arrival of its building modules. Watch the video to witness the stack in action.

Modular construction is far from a new concept in the United States. As early as 1908, Sears, Roebuck and Co. offered the American dream through kit homes that arrived by rail with all the components to complete the home, including instructions. Sears’ initial offering priced homes between $700 and $4,000, and about 75,000 such homes were sold during the approximately 30-year span of their being marketed. Currently, labor shortages and increasing material costs are dictating that modular or “off-site” construction may again be the facilitator of home ownership for Americans. The modular construction industry is currently undergoing a rebirth in order to fill a void between affordability and market demands for quality. In pursuing this end, the industry has had to overcome the twin hurdles of both a marketplace misconception, as well as previously accurate, but now dated, perceptions. Addressing the misconception hurdle first, it is noted that modular construction had previously often been confused with manufactured housing, the description of a home that is brought to a site via a chassis, which is part of the structure itself. Once to its destination, manufactured housing may be converted into real estate (per most lending standards) by the removal of the axles and trailer tongue (often referred to as “trailer homes”). By comparison, modular construction is the process in which a building (or part of a building) is largely constructed off-site in a controlled environment and then brought to the site for assemblage and completion. The fact that some market participants previously confused “old-school” modular construction with manufactured housing speaks to the second of the aforementioned hurdles in that it was not uncommon for modular construction over the past 45 years to prioritize affordability over form — to the degree that some modular homes had little more appeal than manufactured housing.

Modular construction today is emerging as a viable alternative to on-site construction in both the residential and commercial building markets. Several factors are contributory to this trend, with cost being a primary influence, but the considerations of efficiency and the increasing ability (or willingness) of off-site construction companies to produce a product that is competitive in appeal with its on-site counterpart being equally important.

Not Your Father’s Modular Construction

Architectural sophistication such as clerestory spaces and cantilevers are now features available to off-site builders, with the willingness of off-site construction companies to provide products that their evolving clientele requested being as large a part of this evolution as changes in technology. The incorporation of off-site components to a home has become prevalent in the highest-quality homes over the past several decades. The most obvious example of this is the use of premanufactured trusses that incorporate lightweight construction techniques, such as mending plates and glue, in all quality ranges of homes, not to mention that the off-site creation of finish trim and cabinetry is commonplace to the point of it being difficult to find a jobsite where this work is not done off-site. The acceptance of off-site-built components to a home has led to a logical progression whereby portions of a home that may not be fit for a full off-site build will have areas such as an entry, wing or entire floor built in a controlled environment. Bill Neeb of Teton Trusses in Etna, Wyoming, has capitalized on this logic to expand his truss construction operation into one that frames walls and other members in a controlled environment. Neeb pointed to recent examples of local construction incorporating modular components, including the framing of a 2,300-square-foot home that was accomplished in one day using panelized walls, a savings of two weeks of winter-weather construction. Neeb reported that his plant is currently undertaking a 7,000-square-foot expansion in order to accommodate increasing demand for off-site construction. 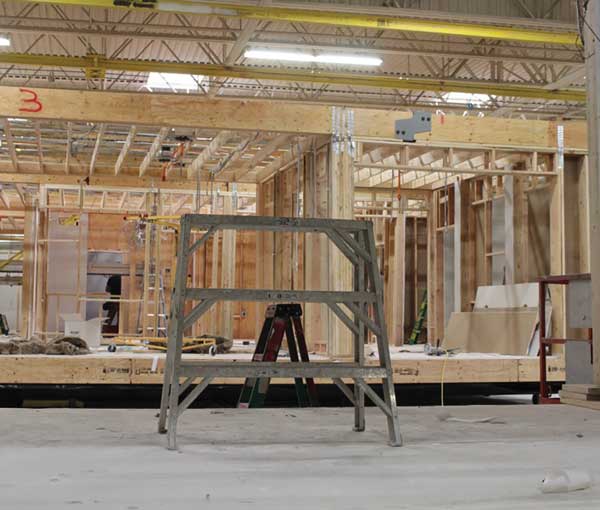 Employment of off-site construction locally includes both commercial and residential applications, with an example of the latter being developer Remy Levy’s use of off-site construction to bring homes at his Etna Village Estates to market. This past summer, Levy managed the construction of three homes ranging in size from 1,577 square feet to 2,600 square feet, with ultimate marketing prices ranging from $295,000 to $419,000. Levy reported that he had originally priced the homes using on-site construction, but found that homes could not be produced at the price points that suited the local market. Through the modification of existing floorplans provided by Idaho-based homebuilder Champion Homes, Levy feels he has captured both the quality and appeal desired by local market participants at a price point that works.

Perhaps the most notable example of commercial off-site construction in the local community is that of the construction of the new Community Learning Center building. This building was recently built (ongoing at the time of publication) as a joint collaboration between Nashua Homes of Boise, Idaho, and locally operated Big D Construction.
This 15,000-square-foot, three-story building was erected near the end of 2016. The project maintained an impressive nine-month timeline, which calculated to an approximate 50% savings in time. Project Architect Greg Mason of Krikor Architecture, an area specialist in modular design, reported that this mixed-use building represents one of the few mixed-use buildings of off-site construction in the country and incorporates high-end attributes such as a LEED Gold heating system. The finished product will house seven classrooms, a community nonprofit training center, a commercial kitchen and the Head Start Regional Offices.

Cost Savings – Off-site construction’s ability to locate its construction facilities more proximally to population centers provides the opportunity to build without having to offer financial incentive for workers to commute. This is the main component in cost savings for an industry where it is not uncommon for labor to account for over 50% of a total project cost. Estimates provided by advocates for off-site construction (industry groups and the companies themselves) often quote construction savings to be in the 20% to 30% range.

Efficiency – A controlled environment that is faster. If timed correctly, a home can be built during winter months and arrive at the site immediately subsequent to snow removal and foundation construction in the spring. The previously discussed construction of the homes in Etna Village Estates had a construction chronology of 13 weeks — which could have easily otherwise taken from 10 months to a year. In an industry where time is money, this savings is not to be underestimated.

Green-Friendly – The controlled environment also contributes to a more green construction process. The benefit of having several construction projects ongoing at the same time in a plant allows for off-site construction companies to buy lumber at length and cut it to specifications of wall dimensions in a controlled environment. Furthermore, as the production of some scrap wood is unavoidable in the construction industry, the ability to utilize the waste from one job to another job is desirable. Centralized construction also has the benefit of minimizing site traffic, which not only saves on fuel, but lessens the disturbance of the site itself. 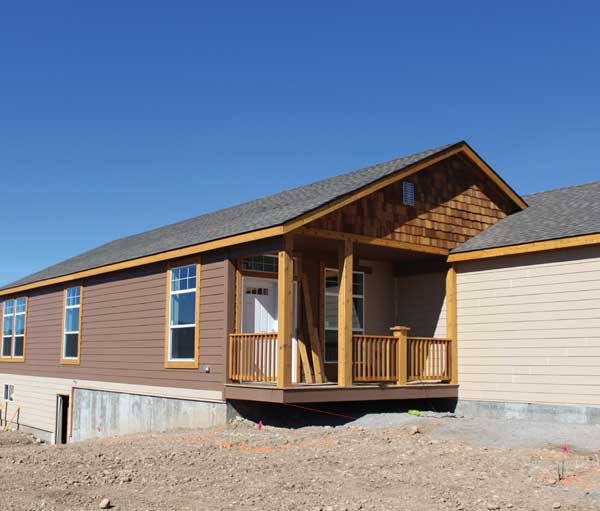 Despite the suitability of off-site construction for several applications, the growth of modular construction does not, by any stretch of the imagination, signify the beginning of the end of on-site construction. Complexity of design, incorporation of curve-linear walls and complex window applications are all attributes of a home that would lead toward it not being an ideal candidate for modular construction, or at least a complete off-site build. Perhaps the greatest limitation to off-site construction is the consideration of module size. Anything built off-site as a module must be moved to the construction site and must fit on a truck that has to go over bridges and under wires. As a result, the outer dimensions of a module may not exceed 16 feet tall by 72 feet long, and designs must reflect this. Another consideration is that, in order for cost savings to be maximized, some degree of “not reinventing the wheel” should be planned. That is to say, a modular construction company needs to consider the bottom line as much as you. A design that places a would-be developer’s stamp on a project, but pushes a company to stray significantly from the design conventions it is “tooled up” to do, may erase the desired cost savings. To this end, a prospective developer’s willingness to modify designs or dimensions to even a slight degree may yield significant cost savings.