Year-end statistics for 2015 reported an over 12% increase in sales volume (number of sales) when compared to data from the previous year. This represents a return to expanding sales numbers after a reported contraction in 2014. However, the decrease in volume of 2014 was directly related to the very strong sales numbers of the 2013 “rebound year.”  When viewing previous six years sales numbers ignoring the 2013 spike, a generally increasing volume trend is noted beginning in 2009 that continued for the next five years. That said, 2015 numbers are very similar to that of 2013, indicating that the market may be currently in a stable period. Alternatively, it is a reasonable hypothesis that the lack of inventory is keeping sales volume suppressed (which also explains the continued appreciation trends).

The average price of the combined residential market (single-family, attached homes, and vacant land) is noted to have increased by nearly 23%.  Many times the increase in the aggregated price of a sales sample in Teton County is skewed by the changing composition of the inventory of sales. However, in this case, the average indicated price growth of the sale sample is noted to be corroborated by many sales and resales comparisons that have been made with this recent data.  Admittedly, appreciation rates can and do vary by market segments. Nevertheless, the aggregated data does appear to give a reasonable indication of price growth during 2015.

Single-family home sales for 2015 surpassed the 2014 volume of 233 sales, with 2015 reporting 253 sales, an over 8% increase. A reoccurring theme in all the residential is that the sales volume trend has increased steadily since 2009 with the exception of a spike in the sales data from 2013, which made 2014 appear as a year of volume contraction (when it is more accurately viewed as a return to the general upward trend line as shown by the three years of 2010, 2011, and 2012.  The average price of single-family homes is noted to have increased over 20% since the previous year. The indication of aggregated sales data can sometimes be skewed by a change in the activity level of one segment in the market (as opposed to being an indicator of appreciation rate). However, the observation of sales and resale of properties during the 2014 to 2015 time period offer support for this being a realistic appreciation rate for many single-family home market segments.  Notably, the higher-end of the market was observed to have a marked impact on the average price measure as 2015 saw 11 sales of $9M or greater, which totaled over $122M in dollar volume of sales. Comparatively, 2014 only saw 3 sales in this price grouping, which equated to approximately $56M in sales.

Vacant land sales increased in both number of sales and average price. The data available illogically indicates that dollar volume of sales decreased, which is most likely due to a lack of sales data reporting by market participants. The number of sales in the Local market segment decreased by one sale in 2015, while a decrease of this magnitude is hardly statistically significant, it technically could be pointed out to be part of a three-year trend of declining sales volume. However, a more accurate interpretation of this data would be to note the upward trend in sales volume of the Local market from 2010 forward, with 2013 being a rebound year spike and a bit of an anomaly to the data set. Admittedly, a flattening in sales volume for the Local market is observed in the 2014 / 2015 data, but a lack of supply is opined to have been a major contributor to this trend for much of that time period. At the time of the writing of this report, the Teton County MLS reported 14 homesites listed for sale for less than $500,000. While this might appear to be a market trending towards balance (rather than under supply) it is noteworthy that only three of these lots are located within Jackson or a three-mile radius of Jackson.  The remaining inventory is more likely to appeal to buyers searching for a more rural setting.

As was the case for both single-family homes and vacant homesites, the market for attached homes (townhomes and condominiums) was up in 2015 for all three metrics of number of sales (16.84%), average price (54.39%), and total dollar volume (52.83%).  Appreciation rates for attached homes (as indicated by sales and resales), showed an appreciation rate that hovered around an average monthly rate of 1% – 1.5%. Therefore, the indication of average price increase is clearly a function of an influx of high-end sales to the dataset and not simply an indication of market appreciation.  This is most evident in the Resort segment where, in 2014, there were seven sales of homes with prices of $2M or greater totaling $24M of total sales and in 2015 this number was observed to be thirty sales totaling $88M. Big contributors to the 2015 attached home sales included The Lodges at Fish Creek (Shooting Star) – 11 sales, the Timbers at Granite Ridge – 4 sales, and the Four Seasons Residences – 6 sales.

The preceding table arrays a mid-January snapshot of inventory levels for the past 5 years. Inventory levels continue to remain low and are frequently cited by agents as a stagnating factor for volume levels. As of January of 2016, the inventory of homes, attached homes, and vacant land listed for sale was showing to be at its lowest point in five years. Furthermore, although not shown in this table, current inventory levels are noted to be roughly similar to that of 2008 (330 actives) and approximately 44% less than the 2011 peak available inventory for this time of year of 609 properties actively listed for sale in the Teton County MLS. 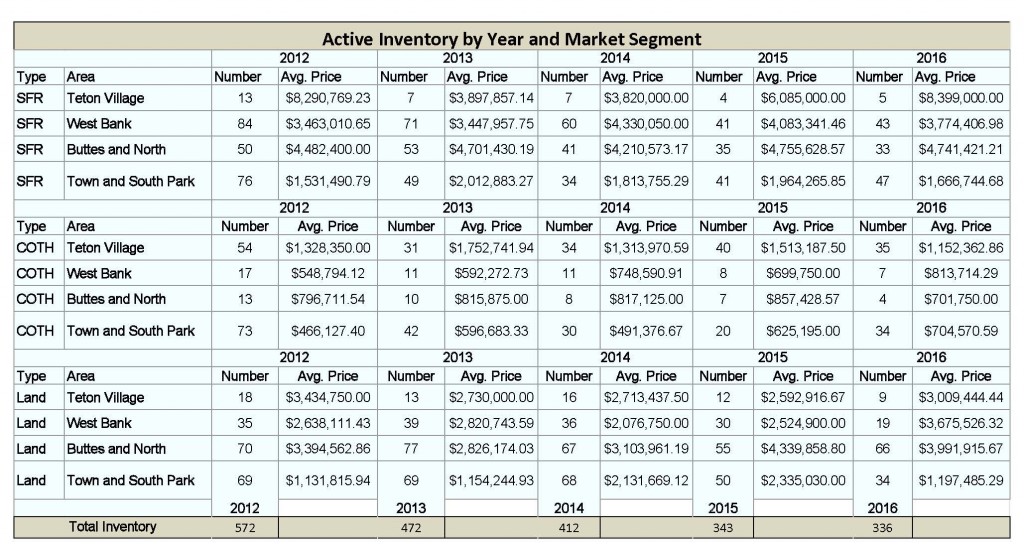